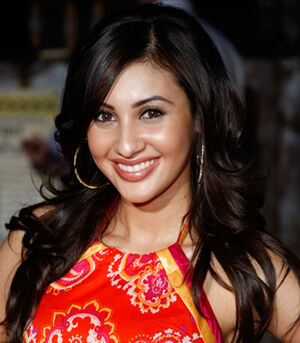 Francia Raisa (born Francia Raisa Almendárez on July 26, 1988) is an American actress who portrays the role of Adrian Lee on "The Secret Life of the American Teenager."

Francia was born and raised in Los Angeles, California to Renan Almendarez Coello and Virginia Almendarez. She is of Honduran and Mexican descent. She has two younger sisters named Italia and Irlanda.

A few years after Francia was born, her father came up with the Latin radio personality "El Cucuy."

She later attended Bisho0p Alemany High School where she was a cheerleader.

Francia began to take acting jobs in her junior year of high school, modeling for print ads and appearing in commercials. She guest-starred in the sitcoms "American Family: Journey of Dreams" and "Over There."

Just a month into her senior year, she booked one of her first lead roles, starring opposite Hayden Panettiere in "Bring It On: All or Nothing" as Leti. Francia also co-starred television films such as "Shredderman Rules" and "The Cutting Edge: Chasing the Dream."

In 2009, Francia guest-starred on the USA network's TV series "In Plain Sight" and she reprised her role as the lead for the sequel to MGM's "The Cutting Edge: Fire & Ice" in the spring of 2010.

She has also co-starred in a short film directed by David Henrie called" Boo" which aired recently on YouTube.

Francia appeared in a music video for pop duo Savvy & Mandy. In 2013, she starred in the Christmas movie "Christmas Bounty" alongside Mike "The Miz" Mizanin.

Retrieved from "https://secretlife.fandom.com/wiki/Francia_Raisa?oldid=25703"
Community content is available under CC-BY-SA unless otherwise noted.