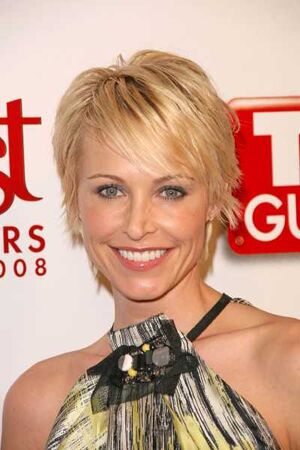 Josie Bissett (October 5, 1970) is an American actress best known for her roles as Jane Mancini on FOX-TV's Melrose Place and as Kathleen Bowman on The Secret Life of the American Teenager.

Bissett, a native of Seattle, Washington, began her career at the age of 12 as a model in print advertisements and television commercials. At 16, she left home and moved to Japan to further her career, and at 17 headed to Hollywood to pursue acting.

Bissett soon landed the role of 'Cara' on The Hogan Family, where she spent two seasons. Within two years of her arrival in Los Angeles, she was cast on Melrose Place. She has made appearances in such projects as the ABC movies The Fire Above and Dare to Love, the FOX telefilm Deadly Vows and the USA cable film Baby Monitor: Sound of Fear. She most recently starred in the ABC Family Channel original telefilm I Do, They Don't, a romantic comedy about blending two families into one. She has also made numerous guest-starring appearances, such as a 2004 appearance on NBC's Law & Order: Special Victims Unit. In 2008, she began a recurring role on the ABC Family TV series, The Secret Life of the American Teenager as Kathleen Bowman. She starred in the Lifetime Television original film The Other Woman, based on the Joy Fielding novel and directed by Jason Priestley. It debuted on 28 June 2008.

Bissett made her big-screen film debut in Oliver Stone's The Doors, as the wife of Doors' guitarist Robby Krieger. Her subsequent films include the coming-of-age comedy Book of Love and the psychological thriller Mikey.

Bissett has hosted television shows on the topic of parenting, including Parenting & Beyond, which offered parents creative solutions to everyday problems. She also hosted the PBS educational special, Teach More, Love More, which follows four families, each with a child in a stage of early childhood development. She has appeared on several magazine covers, including TV Guide, Rolling Stone, Entertainment Weekly, Shape's Fit Pregnancy and New Woman. Bissett has also been the face of several national commercial campaigns, including Neutrogena's skin care line, Dr. Scholl's Pedicure Essentials, and Murad Skin Care.

Bissett has co-edited two books, Little Bits Of Wisdom and Making Memories, which compile parenting stories and advice from parents around the world. She also authored a children's book, Tickle Monster, released in April 2008.

Bissett appeared as a guest star in the 2009 series Melrose Place, reprising her role as Jane Andrews-Mancini.

Bissett and Rob Estes were married in 1992, but divorced in 2006 after more than 13 years of marriage, Estes, 42, told Entertainment Tonight Bissett, 34, had "decided to move on to greener pastures." They had two children together - Mason Tru (born 21 July 1999) and Maya Rose (born 14 April 2002). She currently resides in Seattle.

Retrieved from "https://secretlife.fandom.com/wiki/Josie_Bissett?oldid=16633"
Community content is available under CC-BY-SA unless otherwise noted.