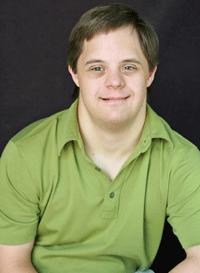 Luke Zimmerman (born c. 1980) is an American actor who is best-known for his role as Tom Bowman, the brother of Grace Bowman on ABC Family's "The Secret Life of the American Teenager."

Like his character, Luke has Down syndrome in real life.

Luke was a student Performing Arts Studio West. He portrayed the role of Romeo in the play "Romeo & Juliet."

In 1990, he starred in the ABC network television movie "Daughter of the Streets."

Retrieved from "https://secretlife.fandom.com/wiki/Luke_Zimmerman?oldid=27745"
Community content is available under CC-BY-SA unless otherwise noted.