The Secret Life of the American Teenager
Register
Don't have an account?
Sign In
Advertisement
in: Cast members 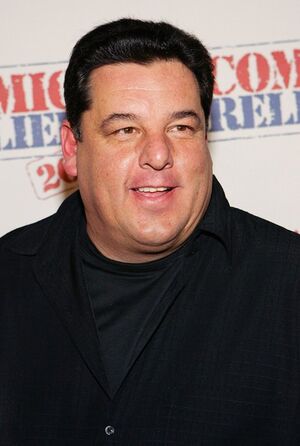 Steven R. "Steve" Schirripa (born 1958) is an American actor best known for playing Bobby Baccalieri in The Sopranos. He also plays Leo Boykewich on the ABC Family drama The Secret Life of the American Teenager.

Born to an Italian father and a mother who is half Jewish and half Italian, Steve Schirripa was born in Bensonhurst, Brooklyn, New York. After landing a role as an extra in the Martin Scorsese classic Casino, Schirripa decided that he wanted to become an actor and played several minor roles in movies, including The Runner (1999) and Joe Dirt.

Schirripa was a frequent guest on the Don Imus radio program. In February 2007, Schirripa began to make appearances for Total Nonstop Action Wrestling on Spike TV, siding with Team 3D as their cousin in their ongoing battle against The Latin American Xchange. On October 30, 2007 he appeared on The Podge and Rodge Show. He is also currently doing spots as "Steve the Judgmental Bastard" on The Tonight Show with Jay Leno, and has recently taped several episodes of The Gong Show with Dave Attell as one of the celebrity judges. He currently has a recurring role as Ben Boykewich's dad in the ABC Family show The Secret Life of the American Teenager.

Schirripa now hosts a food based show on Lifeskool entitled Steve Schirripa's Hungry. In 2009, he made a cameo appearance alongside fellow Sopranos actor Frank Vincent in Stargate Atlantis episode "Vegas".[4] Recently, he was in My Fake Fiance with Melissa Joan Hart and Joey Lawrence as The Monkey. Schirripa was also the co-host on NBC's Today Show during their 4th hour with Kathie Lee as Hoda was out. This occurred the week of July 17th. He hosts NBC's poker game show, Face the Ace. The first episode aired on August 1st, 2009.

Community content is available under CC-BY-SA unless otherwise noted.